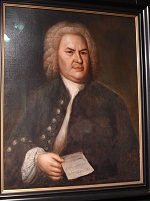 Born in a town called Eisenach. The birthplace is somewhere very close to the current location of Bach Museum

Both his parents died when he was 10 years old. So He lived with his brother and studied and performed at St. Michaels’s church

Went to Luneberg to study music for two years

as an organist and as a director of music later in the ducal court.

Took a job as organist at Blasius Church in Muhlhausen. He got married to Maria. In 1708 went back to Weimar for 10 years

Left Weimar in 1717 to take up the position of Director of music in the palace of Kothen, offered by Prince of Anhalt-Kothen

In 1723, was appointed Cantor at Thomasschool at the Thomas Church in Leipzig and stayed for 27 years providing music for four churches in the city. He died in Leipzig in 1750.

Bach Museum in Leipzig is the location of his house