Carl Friedrich Benz, sometimes also Karl Friedrich Benz, was a German engine designer and automotive engineer. His Benz Patent Motorcar from 1885 is considered the first practical automobile. He received a patent for the motorcar in 1886.

The success of the company gave Benz the opportunity to indulge in his old passion of designing a horseless carriage. Based on his experience with, and fondness for, bicycles, he used similar technology when he created an automobile. It featured wire wheels (unlike carriages’ wooden ones) [10] with a four-stroke engine of his own design between the rear wheels, with a very advanced coil ignition[11] and evaporative cooling rather than a radiator.[11] Power was transmitted by means of two roller chains to the rear axle. Karl Benz finished his creation in 1885 and named it “Benz Patent Motorwagen“.

It was the first automobile entirely designed as such to generate its own power, not simply a motorized stage coach or horse carriage, which is why Karl Benz was granted his patent and is regarded as its inventor.

His invention is in the Deutsches Museum Verkehrszentrum focusing on transportation. 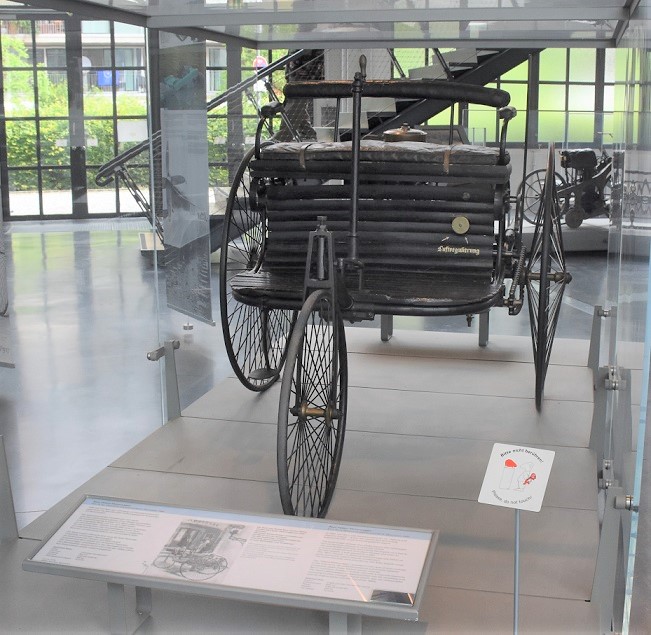 While the Viennese support Siegfried Marcus as the inventor of the first car, most auto historians give credit to Gottlieb Daimler (1885) for the first modern engine and Carl Benz (1886) for the first gasoline-fueled car. But Marcus, the Jewish inventor, also deserves to be remembered as one of the first inventors of the automobile.

Marcus became an apprentice machinist at the age of 12, and five years later he joined an engineering company building telegraph lines. Within three years he invented a telegraphic relay system and moved to Vienna, where he was employed by several government and scientific organizations. In 1860 he established his own laboratory there. Marcus built his first automobile in 1864, a vehicle that was powered by a one-cylinder internal-combustion engine. Because the machine had no clutch, the rear wheels had to be lifted clear of the ground before the engine could be started. Dissatisfied with its performance after one test drive, he dismantled it.

Absorbed in other projects, Marcus did not return to his invention until 10 years later. His next vehicle, with a remarkably advanced electrical system, is preserved in the Technical Museum for Industry and Trade in Vienna; it is probably the oldest gasoline-powered automobile extant. Because Marcus was a Jew, museum authorities had to hide the vehicle to prevent its destruction during the Nazi occupation. In 1949–50 it was overhauled and driven at about eight kilometres per hour (five miles per hour).

Marcus was credited as having invented the petrol driven motor car. Marcus was removed from German encyclopedias as the inventor of the modern car, under a directive from the German Ministry for Propaganda during World War II. His name was replaced with the names of Daimler and Benz.

His second car at the Vienna Technical Museum. 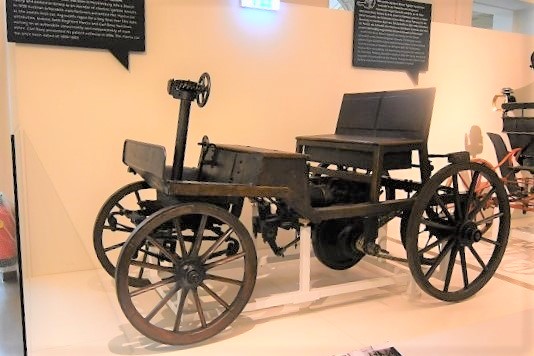