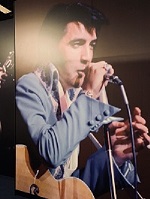 Regarded as one of the most significant cultural icons of 20th century.

Mayhorn Grocery Store: Elvis used to go, sit outside and listen to music

Another House in Memphis

Graceland: His mansion in Memphis